You could call it fate that Laurynas Mazeliauskas and Žilvinas Kuprėnas ended up at the same job interview. Neither of them got the job, but they started making these sweet record clocks instead! We are very excited to have them in our upcycled marketplace. Check out their story. It all started at that fateful interview. As they waited, Laurynas and Žilvinas started talking. Laurynas had an idea to create record clocks. In his grandfather’s basement there were around 200 old vinyl records that weren’t being used. Žilvinas had a background in marketing. They decided to give it a go. The pair began to create artwork and cut record clocks from vinyl. The first clock they created was the Daft Punk one shown in the image above. Žilvinas hung the record clock on the wall and posted it on Facebook. And then the miracle happened – people starting liking, sharing and talking about it! Laurynas and Žilvinas started to think their idea might actually work as a business. They began creating new clock designs and working on it in their spare time. 6 months later CROP SHOP became their main job. We love the creative record clock designs that CROP SHOP come up with. Naturally, they make a lot of music-inspired record clocks. They also make funky designs they think people will love, like this cool pizza clock! Laurynas and Žilvinas use a laser machine to cut the record clocks. Then they clean the records to make them nice and shiny. Customers can choose to have the original label from the record for the centre, or a coloured sticker. CROP SHOP package their record clocks in pizza boxes for shipping.

Check out the awesome CROP SHOP record clocks in our upcycled marketplace. International shipping is free for all of our marketplace items!

Which of these record clocks do you want the most? 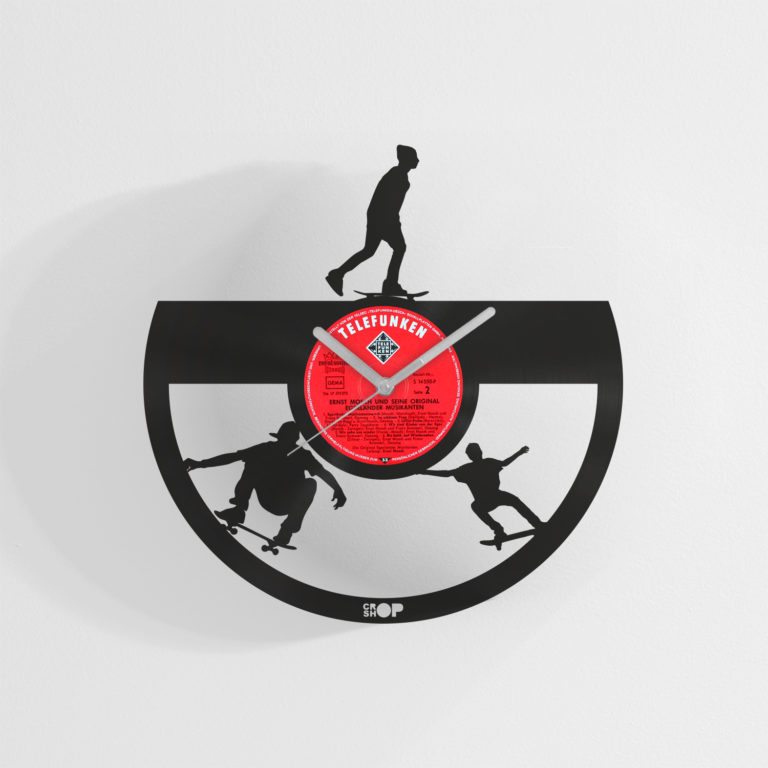 One Thought on Record Clocks