Skip to content
Home / Use That / cardboard / Chiquita Chandelier

Every now and then one stumbles across brand packaging that is simply too beautiful to throw away. We’re talking about the type of branding that you actually want to showcase, rather than cover up for reuse. Iconic branding such as Chiquita. With it’s bold blue and yellow colouring and trademark Miss Chiquita logo, we’re not surprised that Anneke Jakobs decided to start saving discarded Chiquita banana boxes. 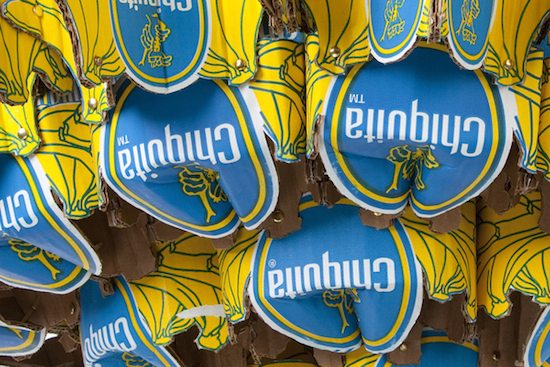 Jakobs was studying at the Utrecht School of Product Design and working on the side at a supermarket. She began collecting the beautiful used Chiquita boxes that were being thrown away.  The lightbulb went off when she received a school assignment to create a product design around food.

I got inspired by shape of the print on the box and the folding/bending-quality of the cardboard.

Jakobs decided she wanted to use as little extra material as possible to assemble the chandelier. So she came up with the idea of using paper fasteners. Therefore the process of making a Chiquita chandelier is all about carving, folding and paper fastening.

While overwhelming at a glance to understand, Jakobs’ Chiquita chandelier is essentially 3 tiers of chandelier groupings. Each grouping has a unique pattern in which the Chiquita cutouts are arranged and fastened. Once assembled the 3 groups are fastened together with paper fasteners.

Would you give this Chiquita chandelier a go? If you do please be sure to send us photos!

cardboard, Inspiration, Lighting, Make That, Paper, Use That